CHALLENGE TO COMBAT A PLACE “UNDER THE WATER”

Where has both the Fairy stream and the Death area? That is Datanla waterfall in Dalat. As a scenic spot, Dalanta also has many fascinating games.

Datanla or Datanla is a large waterfall in the Datanla tourist area located about 10 km from Dalat city. Datanla Waterfall is a large group of falls including the upper waterfall (also known as Fairy stream), the abyss of death and the lower waterfall cluster. Seven majestic cascades with clear water flowing murmuring through the mountainside and then loudly, raging down the large rocks of white foam. In the journey to Dalat, you do not miss the waterfall with the following interesting games.

“UNDER THE WATER” – The Land of legends
Datanla is a compound of K’Ho language including Da – Tam – N’ha meaning water under the leaves. Waterfall falls from a 20m high rapids, crept through the rock and then hidden somewhere in the leaves of the deep forest to form a stream at the time it appears as inviting, as challenging to step foot visitors.
There are smooth stones, ancient legend, fairies descended on earth, bathed in streams and frolicking here, so this area is also known as Fairy stream. Going further down, you will see a deep, deep alley known as the Grim Reaper. The ancients recounted, Datanla was the place where the brave K’Lang and the H’biang mountain girl met. K’Lang guy has fought with wild animals to save beautiful people. The fighting took place fiercely and the forest was destroyed, creating deep holes, one of which was the death pit at the foot of the falls.
Another legend says that since ancient times, Cham people from Phan Rang often used to attack Lach and Chil people in Lang Biang plateau to gain land and capture slaves. While Lach people are about to lose because of the lack of “water”, they accidentally discover this waterfall. Having drinking water, the Lach people won and protected the village. And the Cham lost because they did not know “there is water under the leaf”. Since then, the Lach tribesmen named Da Tam Nha (under the leaves with water) to remind them for the next life. 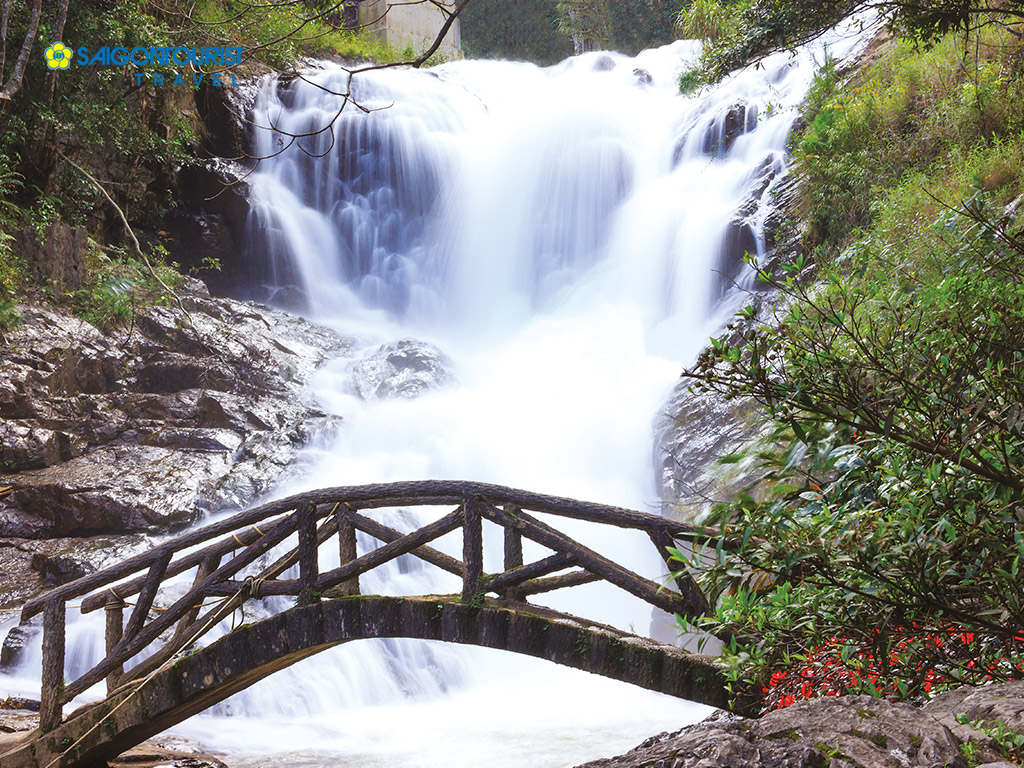 ADVANTAGES NOT FOR “HEARTED” PEOPLE
In Datanla, there is no shortage of challenges for those who love adventure, exploring nature. You can choose the following “items”, depending on bravery and conditions.

Slide the falls with a trough
The trough system has a length of 1,000m winding around the slopes and old forests. Sliding on the trough are double cars for two people, with hand brake to adjust the speed. Without a system of slides, players have to walk down the waterfall for 10-15 minutes. Go chute, you will arrive in the air “tear the wind that rushed”. Therefore, this is an interesting option, requiring more or less courage and courage. If you get used to the speed, you will feel very “yomost”. 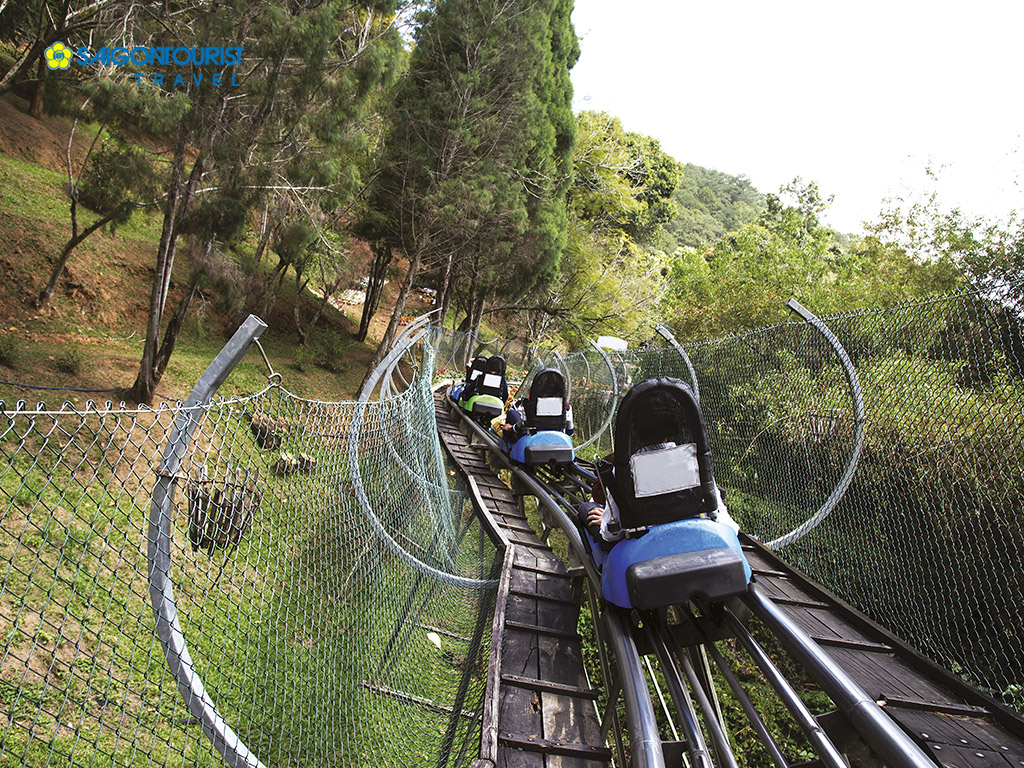 The chute slides overhead through the old forests

Swing over the waterfall
This is an equally challenging activity. The player gripped the vines, kicked the foot of the cliff, who fell back, just like that, just discovered the mysterious, untouched, majestic beauty of the waterfall and gradually moved to a stop in the white water.

Swing rope adventure
This adventure is divided into 6 different levels in order of increasing difficulty including 80 challenges. Including challenges “brainstorm” players like walking on the rope, hanging on the rope and flying in the air. Among them, there are 20 challenges for children.
When you start playing, you will be guided by meticulous instructors to ensure absolute safety. 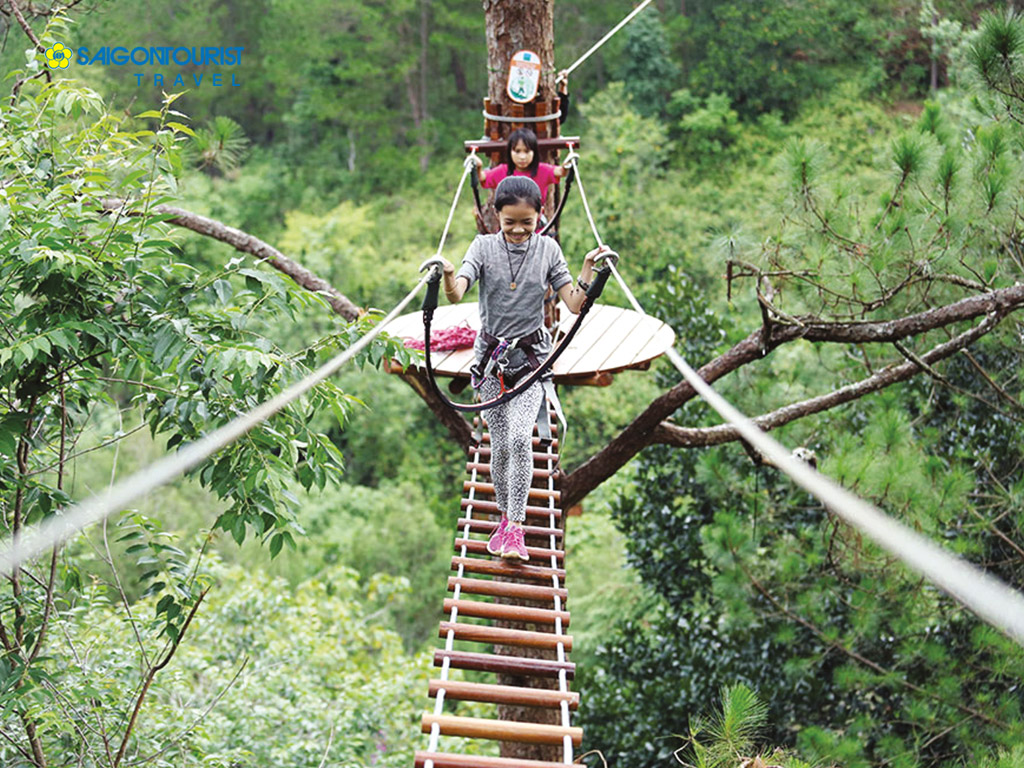 You can walk high through the dense forest

Datanla is not only a land of legends but also has a wonderful nature with Fairy streams, Death region and adventure games that bring a refreshing feeling

Walk to discover the natural forests
After being satisfied with the thrills, you can follow the forest trails to explore another world of Dalat.
You will enjoy a whole fresh atmosphere, watching the green primeval forests, pink grass patches, yellow hills, iridescent wild yellow anemones, listening to birds singing. among thousands of pine 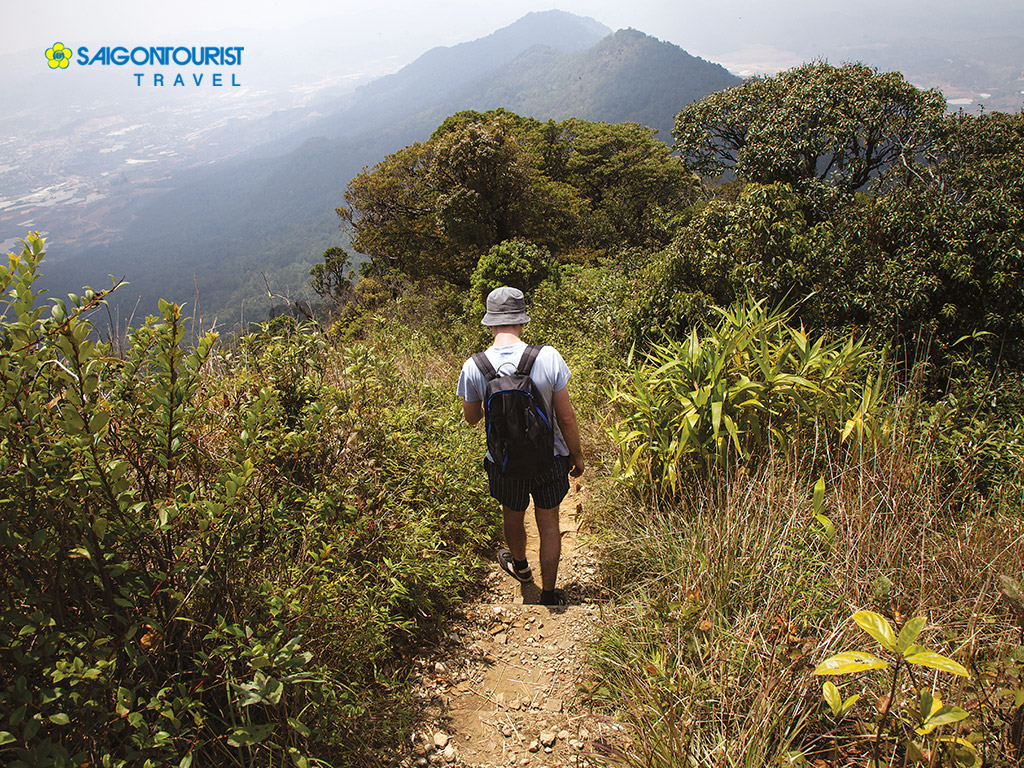 Follow the path in the forest and enjoy the fresh nature

NOTES WHEN PARTICIPATING IN EXAMINATION IN DALANLA